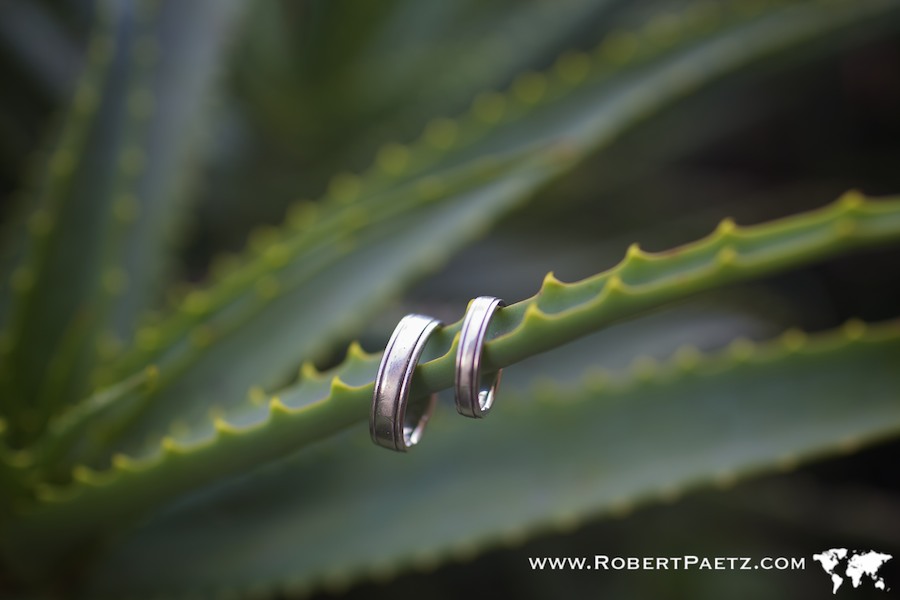 Yesterday marked the second anniversary of being married to my spectacular wife and partner .  Yes, I am also aware it coincides with the our country’s independence day, which is why I have so far been able to keep my promise to her of “fireworks every year”.    This year we wanted to keep the day simple, quiet and ours – we promised not to turn on our computers and reduce the zealous iPhone-checking from level 10 to about a level 4.   After a delicious breakfast at the famed local Cuban bakery here in Burbank, we made the pleasant hour+ drive up the 101 to Santa Barbara.

We spent the first half of the afternoon wandering the old side of town, checking out the Mission, eating gelato and generally sweating too much (it was like the high 80s outside, even in Santa Barbara!).  Finally we settled in for a couple cups of iced coffee and some long conversations, just enjoying each other’s company.   About an hour before our dinner reservations at a local French bistro we jumped back in the car, took a driving tour of town and scoped out the area where the celebrations would be happening later in the evening.  We found a empty parking lot, cleaned  off the day’s adventuring grime with a few wet wipes and a stick of deodorant, then fancied up for the impending French feast. 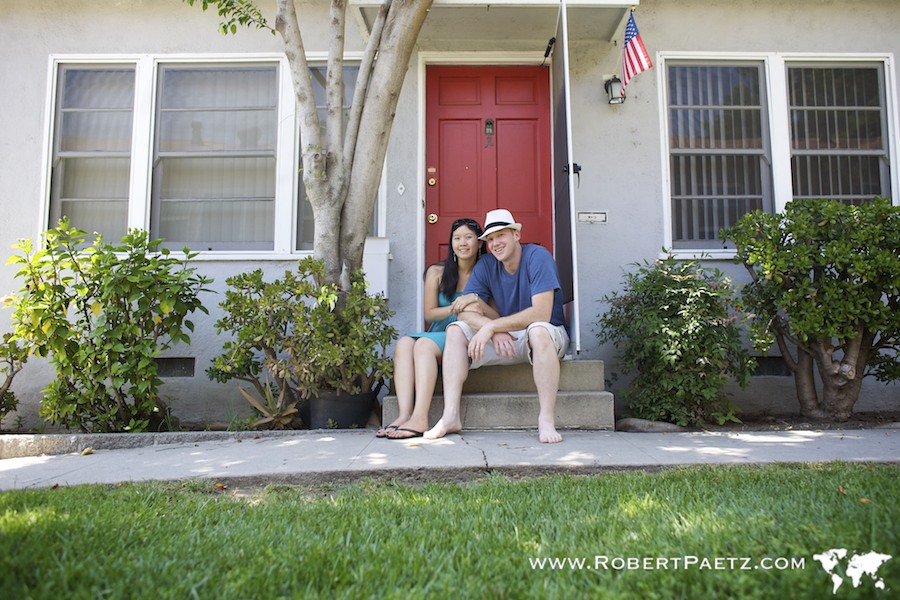 In front of our red-doored palace. 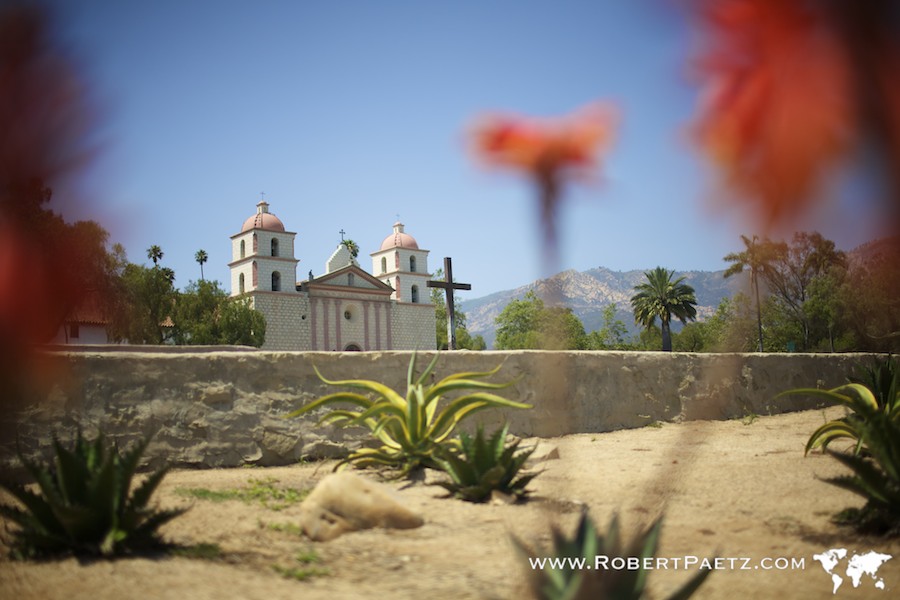 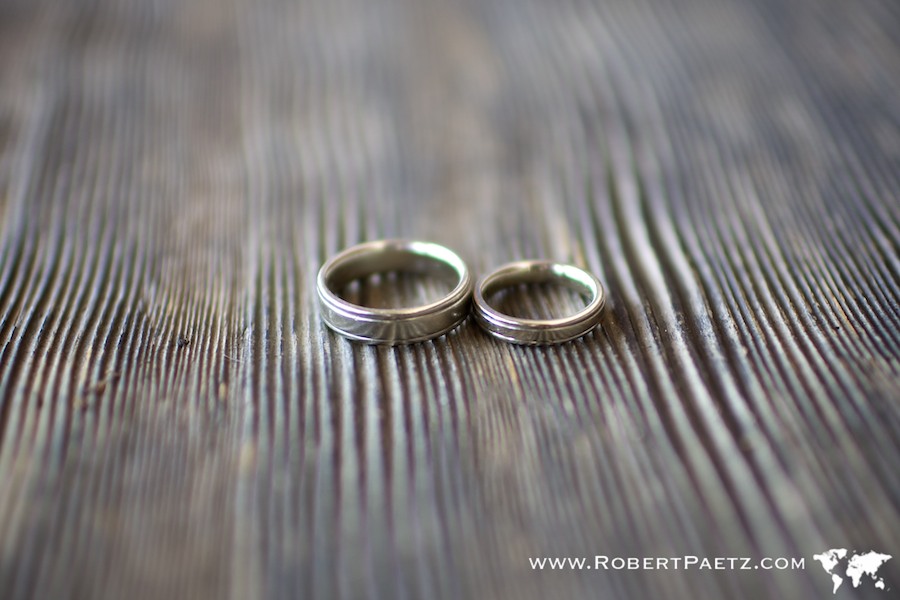 We were chilling out at the Mission when Felicia started noticing the cool textures and insisted on doing some ring shots, including the first picture. Job hazard? 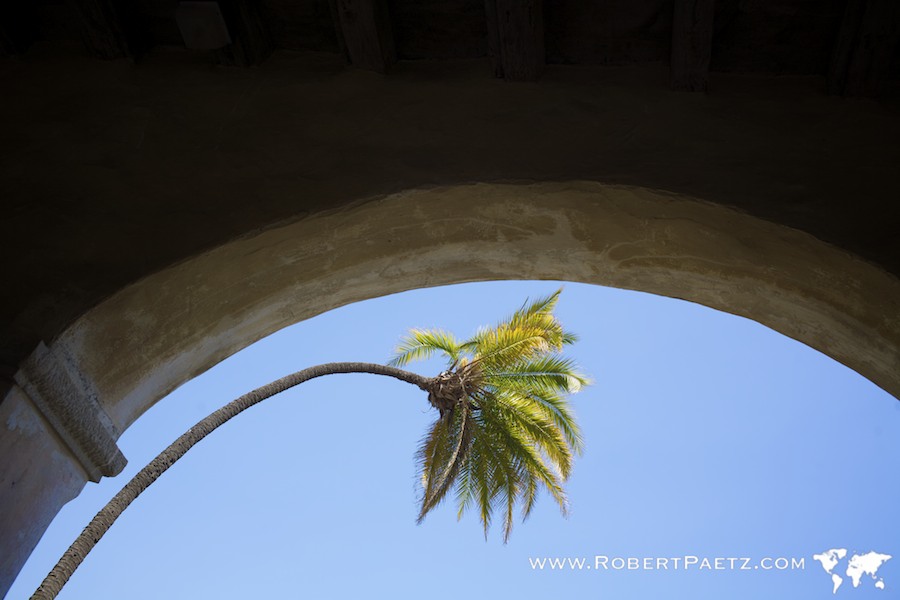 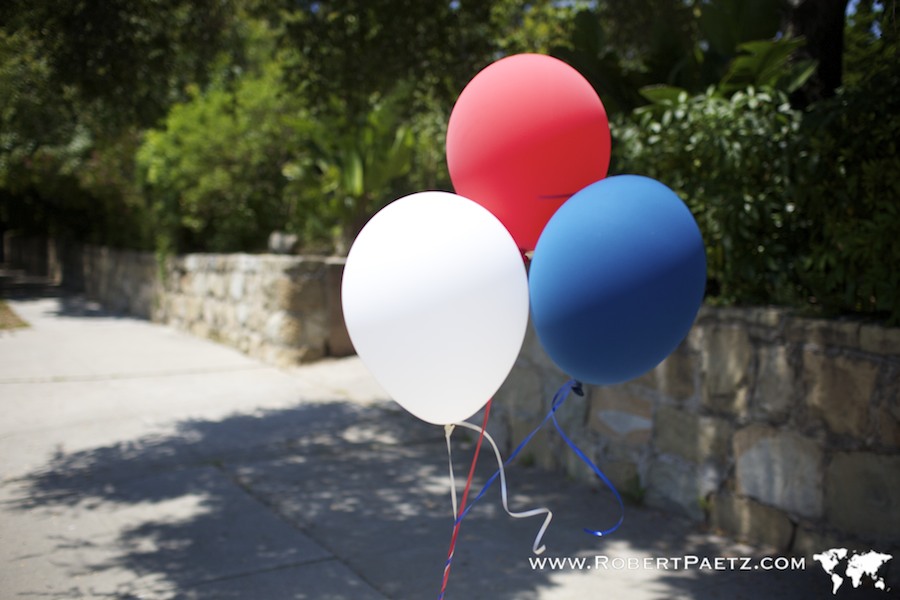 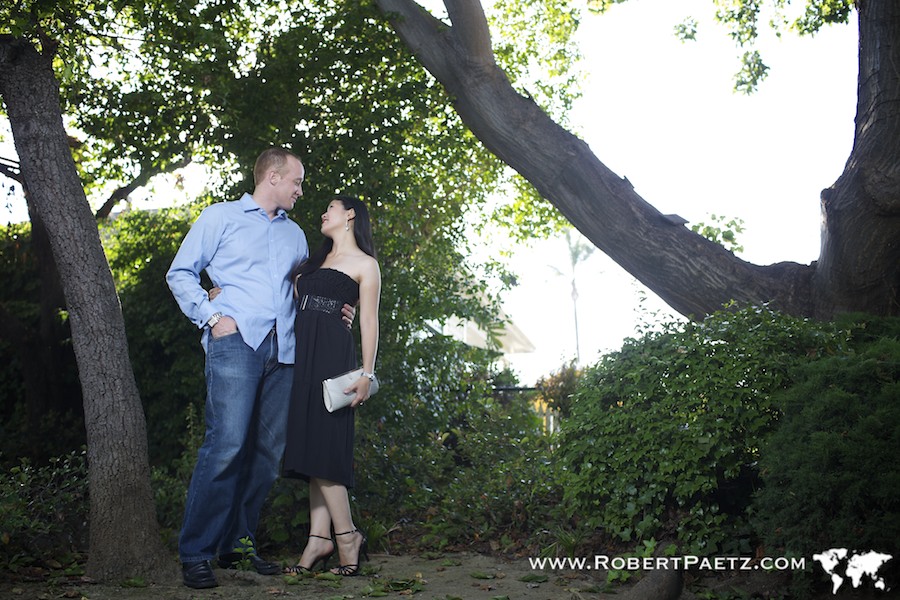 Us, just moments after doing a ghetto outfit change in a parking lot, out of our clothes from walking around all day, to something slightly nicer for dinner. 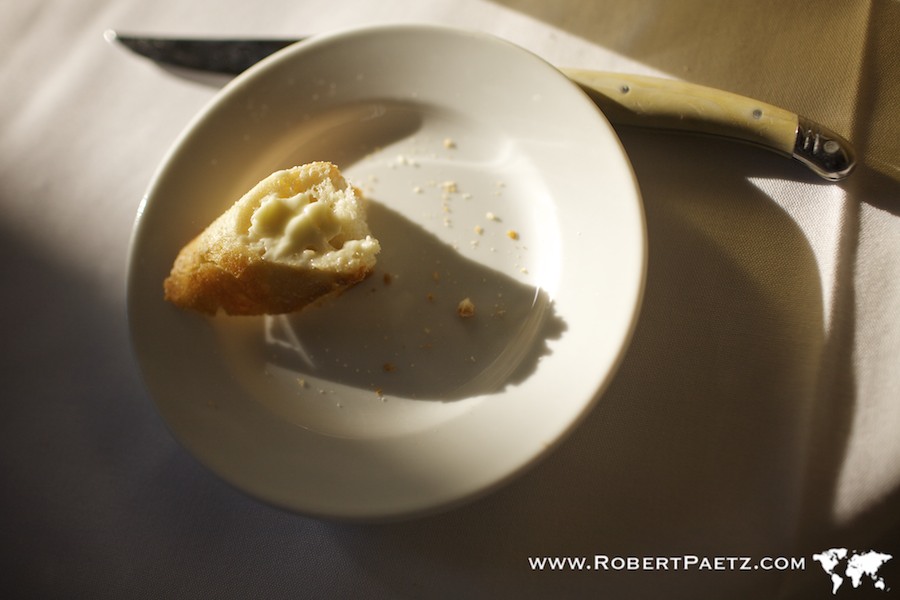 We had reservations at Bouchon (we wed at Le Bistrot in Singapore, thus keeping with tradition, last year we dined at a French restaurant, and this year was no exception), and I was not let down. Alone, I ate a plate with a trio of artisan cheeses, a third of Felicia’s French onion soup, an order of duck confit, 6 or 7 slices of hot bread, 2 beers, a few bites of Felicia’s Wagyu  steak, then we split a creme brulee and lemon/blueberry upside-down-cake thingy….

Did I overeat? Yes.

Was it enjoyable? Absolutely.

Fortunately after dinner we went to see the fireworks and were unable to find parking and were forced us to walk a much-needed mile in each direction.  It may have barely got the digestion started as my wife groaned about feeling sick from all that food. Perhaps the finesse of fine French food is lost on savage gluttons like us… 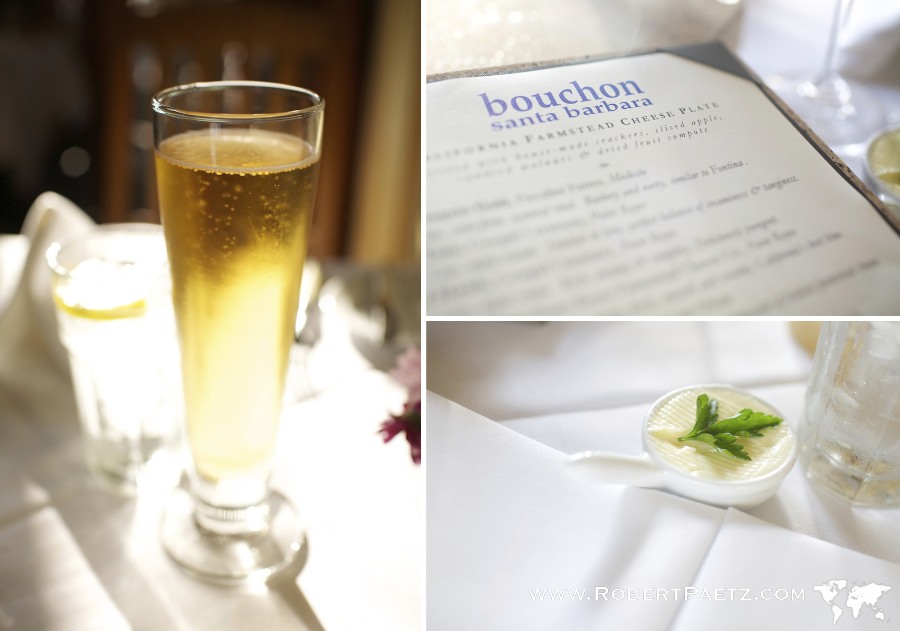 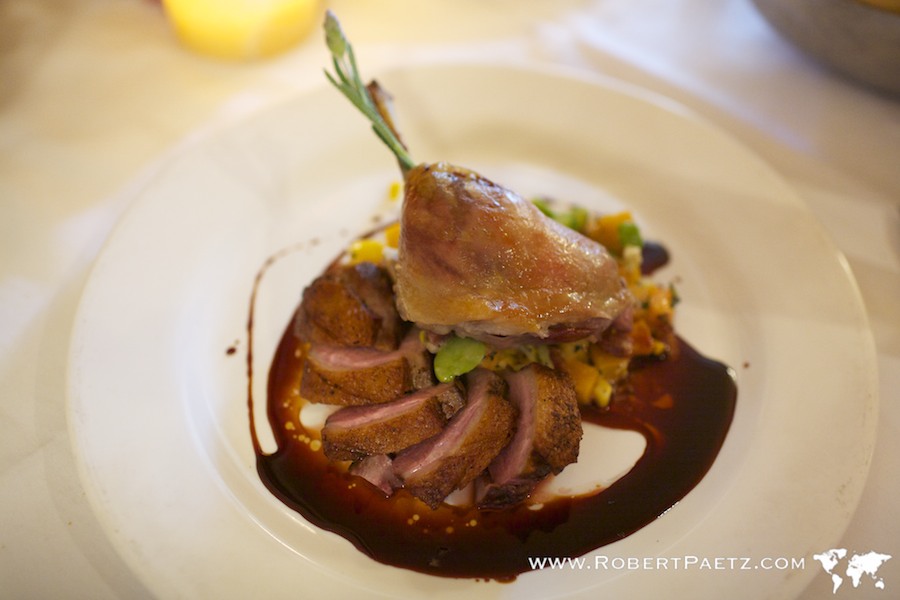 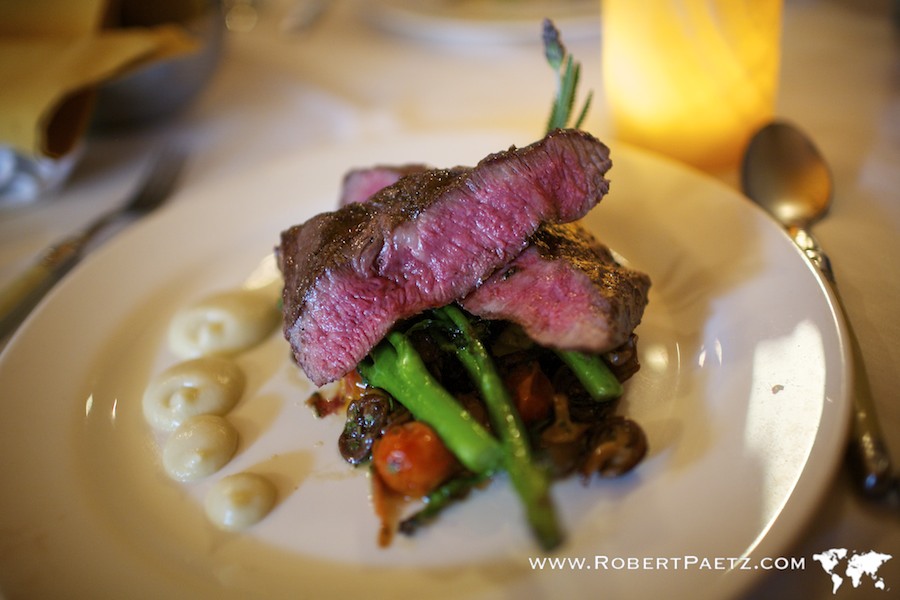 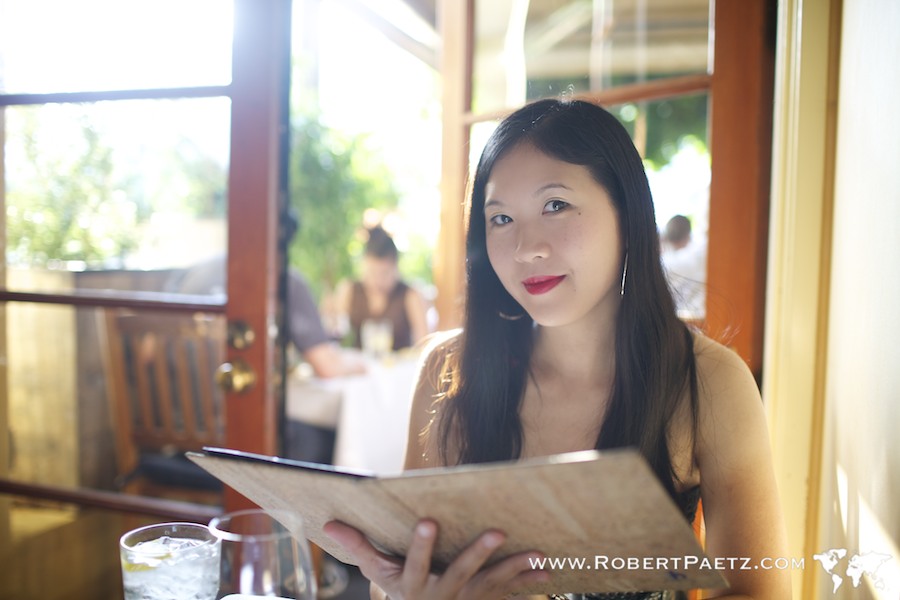 So today, while writing this I have started my third year being married to Felicia, and all I can say is that it keeps getting better and she continually amazes me in all the things she does.  Thank you Felicia, for everything.

The wedding dress — deeply evocative of the swee

That magic hour, as day turned to dusk. ✨

Hands up those who’ve had some of the loveliest

Getting married? Time to hit up your friendly loca

Engagement sessions are a great way to capture bea

I love how my work constantly reminds me how beaut

When in doubt, #lensflare for the dreamiest of sho

We’ve been featuring women a lot lately, and tha

Is it still Ladies’ Night on hump day? Grab your

I’m up for gender equality in any form — inclu

Glad to have caught Dan in this quiet, precious mo

Benita and Derek found a lovely venue right in the

A bride’s gotta have her girls!

Went out to Joshua Tree National Park with Saidah

I miss your hawker food, your sunshine, and your c

many many congrats to one of my favouritest couples in the whole wide world!